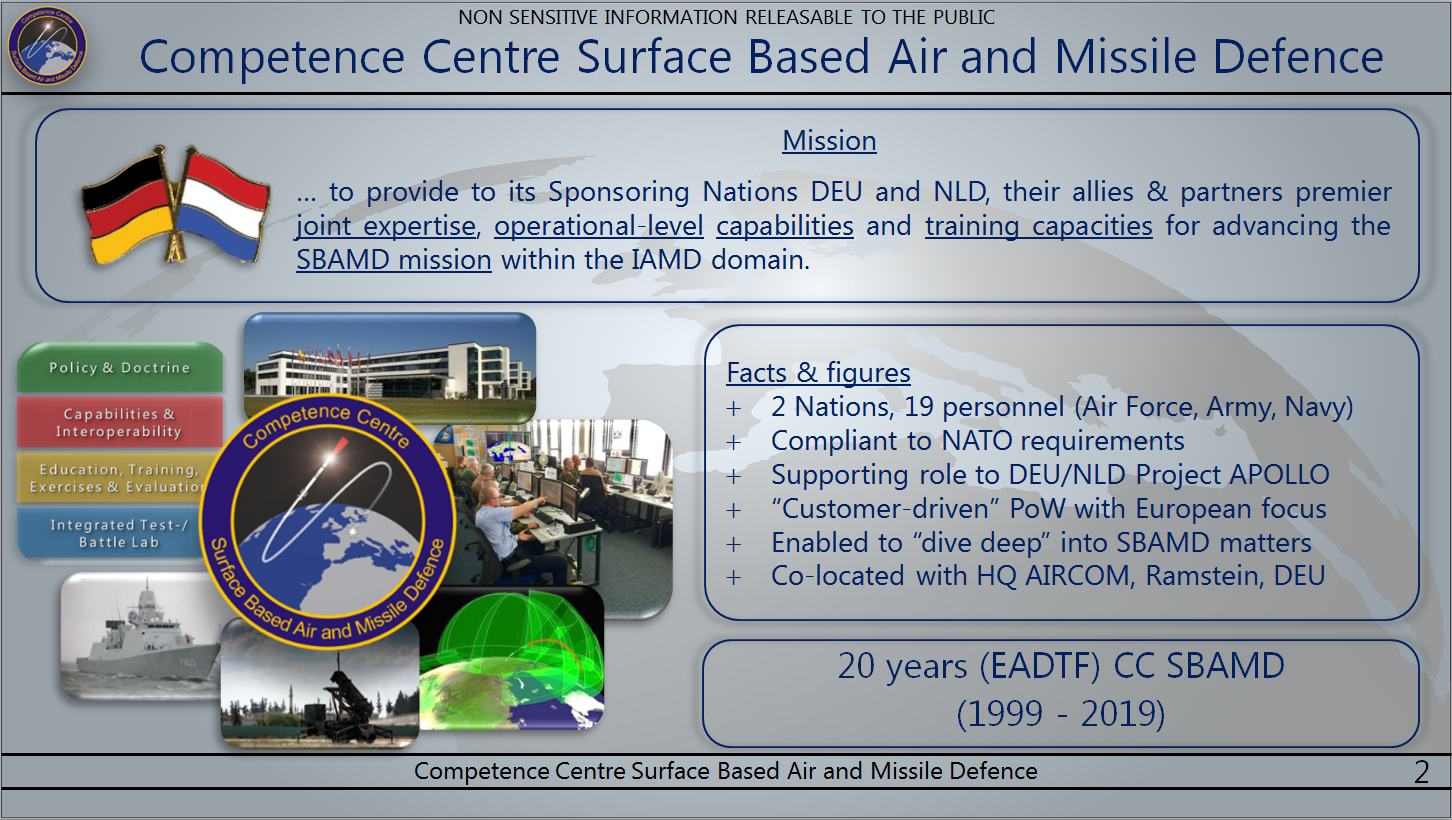 The Competence Centre Surface Based Air and Missile Defence – short CC SBAMD – is a bi-national cooperation sponsored by Germany and the Netherlands. The CC SBAMD is the successor of the Extended Air Defence Task Force (EADTF) which was installed by DEU, NLD and the USA back in 1999. Focused on supporting the sponsoring nations and their ability to conduct Air and Missile Defence (AMD) operations in a NATO or coalition C2 environment the goal was to enhance interoperability amongst three PATRIOT users and their ability to deploy, cooperate and eventually to fight together. In 2008 USA left the EADTF, which continued as a bi-national cooperation and moved to its current location in NATO’s HQ AIRCOM infrastructure on Ramstein Air Base. In 2014 DEU and NLD decided to replace EADTF with the CC SBAMD, same location and manning, however, with a broader AMD-focus and tasking, adapting to changing requirements.

The CC SBAMD is neither part of the NATO Command Structure nor the NATO Integrated Air and Missile Defence System. Contingent upon the Sponsoring Nations consent CC SBAMD can, however, render support in order to reinforce existing NATO entities.

The Competence Centre Surface Based Air and Missile Defence is one of the building blocks of the German-Dutch military cooperation. Consequently, it has close ties with the APOLLO project, which promotes SBAMD cooperation at the tactical level as presented earlier. Hence, CC SBAMD given mission is to serve DEU and NLD through the provision of joint expertise, operational level capabilities and training capacities for advancing the SBAMD mission within the IAMD domain, extending support also to NATO & partners.

Today, CC SBAMD’s staff comprises 19 experienced Air and Missile Defenders and Air C2 experts from Germany and The Netherlands. The relevance of joint approaches to contemporary Integrated Air and Missile Defence operations is underlined by the respective Sponsoring Nations representations of Air Force, Navy and Army personnel within the Competence Centre.

In order to meet current and future requirements, the competence centre’s four sections are capable to address challenging topics for example related to policy and doctrine, interoperability enhancement and capability development or Education, Training, Exercise and Evaluation. Additionally, the section “Integrated Test & Battle Lab” with its organic M&S capabilities (currently in its build-up phase) will seek to tackle future challenges in support of real-world defence and surveillance design and CD&E activities.